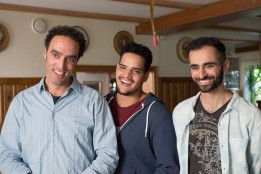 It was in the midst of the 2015 heat-wave. We all were mainly graving seasonal tickets to the public pools, holidays were finally fun on the own balcony and climate-change showed its very sunny side. – Of the according to UNHCR about 60 million refugees worldwide, 890.000 came in this summer 2015 to us in Germany. – Whilst I had my best summer holiday ever with a camper-van in criss-cross France, others did camp in tents in Idomemi or walked, where ever they could get through, three months and longer with their families towards hope.

Gabriele and Hans did what I had done: they were running from the heat and searched rescue in a canoe trip on the Main river. When the two charming and very active pensioners from Karlsruhe were hunted by hunger and heat close to Zapfendorf,  Franconian Bavaria, the canoe is quickly set at shore. Still in life-vests Gabriele and Hans are heading to the village. Gabriele is perhaps the fittest pensioner I ever met. But she’s tired and dehydrated. As a protection against the burning sun she did wrap a scarf around her head, as she tells us.

A worker of a nearby railroad construction site , sends Gabriele and Hans deeper in to the village: right there next to the castle, there’s a guest house and for sure they also will have some food and something to drink!

Kawa used to live in the Kurdish city of Qamischli in north-east Syria, right there, were the the Kurdish Peshmerga troups are fighting against ISIS. His sisters re teachers, his brother an engineer. Kawa himself studied law and works as a lawyer. Used to work as a lawyer. Back in Syria, before the war. Now he lives in Hamburg, improves his German, because he’s dreaming of becoming a policeman in Germany. „I love the police in Germany. They are all nice and friendly to us Kurds“ he says, when we meet him.

Kawa lives in this very hot summer 2015 already for a while in Zapfendorf, the Franconian village. Only a short stroll away from where Gabriele and Hans die hide their canoes to find a place to eat and rest.

The restaurant, that Gabriele and Hans find opposite the castle, has locked doors. Bad luck for them. In the small village there seems to be nothing but this place to get a meal. Just before the two turn frustrated away, Gabriele sees a man at a window. He’s making gestures to walk around the back and use the back entrance. And so they do.

The man is a „colleague“ – as Kawa calls him. He’s waiting at the back-door for Gabriele and Hans to let them in. Bassam, Mohammad and Ahmed are all „colleagues“ of Kawa. They ask the pensioners in the main guest-room of the restaurant  and ask the to wait. Meantime, they’re calling Kawa, who’s German is the best of the small party.

Gabriele and Hans are really glad that they finally reached a place, where they can recover, relax and rest. They are exhausted, thirst can be a torture and they are very hungry too. „My stomach has been hanging down in my knees.“ Gabriele told us later.

Kawa and his „colleagues“ recognized, that the two elderly people were tired and desperately in need for food, rest and refreshing drink.  They offered, what the kitchen had: home-made apple jam, eggs, fresh ripe tomatoes, cheese and yoghurt. With their meal the guests wished a green tea and a glas of milk.

That a toaster was put right on the table, that cutlery and tissues were missing, and that there was no hot food to order, but only cold-cuisine, did not rise doubt in the pensioners: „We thought, these friendly men only started out to run a restaurant. Young entrepreneurs, you got to support them, no? And also: it was already afternoon. In Germany most restaurants close their kitchen at 2pm, don’t they? So all seemed normal to us of course!“ Gabriele remembers and explains us later in her tastefully furnished turn-of-the-century apartment in Karlsruhe city-centre.

Hans did ask for forks, the meal the four „colleagues“ managed to serve was delicious. But the canoe-trip was not over yet, so Gabriele and Hans wanted to pay and go their way.

But Kawa, Bassam, Mohammad and Ahmed reclined the payment: „They were our guests. You must help, no?“ Kawa describes the moving scene, when he explained to Gabriele and Hans, that his „colleagues“ how he calls them, are in fact his room-mates. And that the guest house, in which Gabriele and Hans just enjoyed a great meal, is in fact a refuge-centre and home to many Syrian refugees just like Kawa.

Gabriele is deeply moved. She’s embarrassed, that they called for forks and tissues. When they, the guests, just have been served a great free meal by refugees. „I immediately started to cry!“ Gabriele confirms today. And her partner Hans adds „We only realized, that we were in a refugee-centre, when we asked for the bill.“

Thanks to all the six of them are very open people, the moment of embarrassment quickly fades and turns in to curiosity and friendship: Selfies are taken, addresses exchanged, thanks are flying through the room and all six promise, to stay in touch.

The summer passes, Gabriele and Hans are sending a postcard and a thank-you-present in the Franconian refugee-centre. Kawa is carried on by his destiny, he today lives with his brother in Hamburg.

At Christmas he’s sending a postcard, Gabriele gives us some clothes for him, when she hears, we’re going to see him. – The three are in touch till today.

We, Ysabel Fantou and myself, found this true story in many papers last year. and we found the heroes of this true story thanks to Nathalie Schalk, journalist of „Fränkischer Tag“. – German speakers fid the original article here.

We visited Gabriele, Hans and Kawa. And listened to their stories about this special day in their lives.

A little later, we had finished a script for a short-comedy and a social-spot. It’s election time in Germany next year. And ultra-right-winged populists are sweeping German streets as they do in Europe and elsewhere int he world these days.

But we here got this story of joy&hope, we can put out in front of their bland and simple paroles: Hey, life can be beautiful! The unknown can enrich us! Give it a chance, let’s have a wait&look first! Get to know each other.

We hope we can help with the film we’re making. Help to make this world a better place.

How you can help to make this a better place?

Visit out homepage with all we reached here: “Die Herberge”

All money collected above the cost of the movie will be 100% donated to Lichterkette, a German charity working against racism.

We can write an invoice for your donation above 100€, so that you can tax deduct your expenses (please contact your tax advisor on what text you need on your invoice, in order to deduct it, and get in touch with Sanne about invoice details before donating in case an invoice is needed!).

– We can invoice nationally and internationally.

We got amazing rewards for your support! Many of them ship also overseas.  You are also free to help without collecting a reward. – Please check with us if booking a reward that might involve travel cost! Don’t forget: we’re collecting money for a good cause. The goal will not be reached if all our donations go in to trips and travel. – Thank you!

Watch one of the results of our efforts online! The “Die Herberge Social Spot” with subtitles. 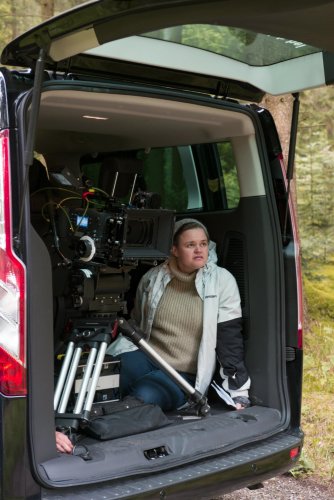 2 thoughts on “A very German Story: Refugees&Pensioners Living Through Their Very Own Fairytale”